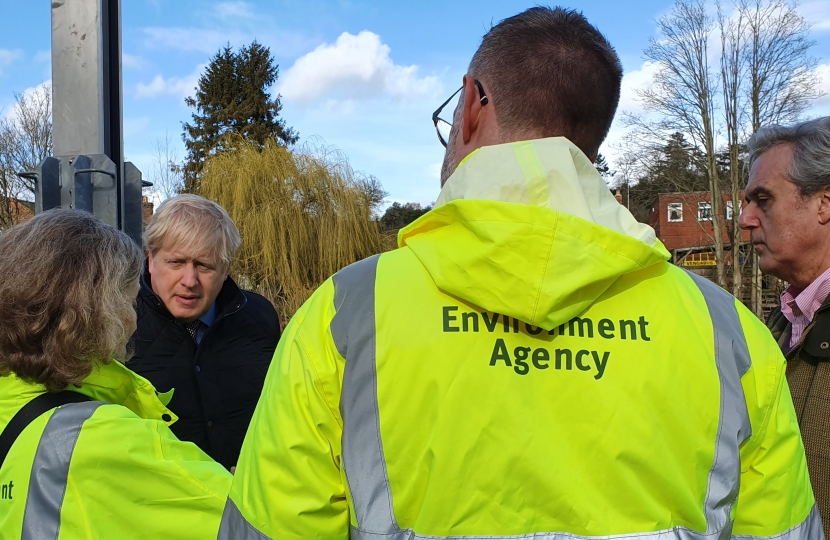 Mark Garnier MP recently caught up with the Environment Agency to check on progress with Bewdley.

Bewdley was affected by the floods in January and February this year and demonstrated the contrast between different approaches to flood defences.

On the western, Bewdley side of the River Severn, the demountable defences proved to be resilient in what became one of the highest floods for decades. However, the eastern, Wribbenhall side of the river saw property level protection struggle badly under the pressure, whilst the temporary flood defences were acknowledge to be a less than ideal solution. Indeed, property level protection is now known as property flood resilience (PFR), to reflect that it is not an absolute solution.

Prime Minister Boris Johnson visited Bewdley after the floods, to meet residents and emergency workers. During his visit, he pledged to “Get Bewdley Done”.

The EA’s briefing covered the plans being formulated for Bewdley and the process it goes through.

The proposals being examined for the area known as Beale’s Corner on the Wribbenhall bank of the Severn will follow the style used in Upton Warren – a low brick wall with glass panels above, with demountable elements as necessary. Plans will not only be designed to protect property, but will also be done with sensitivity to the town.

Proposals are expected to cost in the region of £4.3 million and must pass an economic test that the property being protected is equal to, or greater than the cost of the protection.

Of the 45 properties in Wribbenhall that are eligible for PFR, 39 will be protected by the proposed measures, with the remaining 6 being protected by enhanced PFR and, as necessary, temporary barriers.

Mark Garnier said of the proposals “I am incredibly grateful to the team at the Environment Agency. Not only did they do an incredible job during the flooding – where local factors, especially heavy local rain in the Dowles Brooke catchment area, meant the flooding was unpredictable and incredibly heavy – but they have worked at pace to come up with improved solutions for longer term resilience.

“I, together with my local councillors, will be working with them to secure the best practical outcome for the town. But with a bill of £4.3 million to pay, I will be focussing my efforts on securing the funding for this. The EA and local partners will pick up some of the cost, but the bulk will need to come from central government.

“I am also working with my MP colleagues who represent constituencies all along the Severn catchment area to work up regional plans to help planning across the whole of the flood plain come to fruition. The Severn is the longest river in the UK and provides water for, I believe, 7 million people.

Wribbenhall’s Conservative County Councillor, Ian Hardiman added, “ I am pleased with the EA’s response to our efforts to highlight Beale’s Corner’s vulnerability at times of flooding and for Mark’s contiued support on this issue and his commitment to push the Government for sufficient funding for the proposed project. As County Councillor, I will be calling on the County Council to also support this fantastic step forward for the affected residents of Wribbenhall, who have experienced an exceptionally difficult year in recovering from the floods in February.”