My Article in the Daily Telegraph on Customs Union 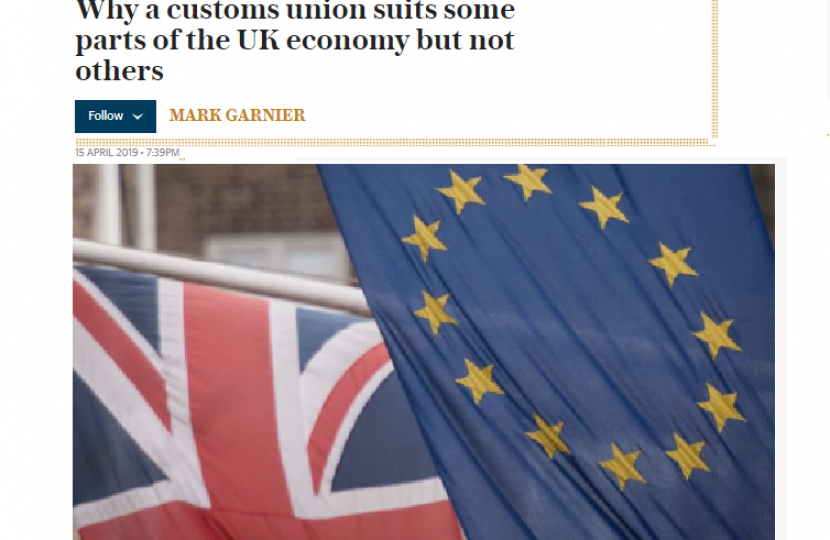 Whilst out campaigning for the Remain team during the EU referendum, I was asked a question that has stayed with me to this day. “What”, the audience member of the debate in Kidderminster asked, “do you think is your opponent’s best idea?”

The answer was as blindingly obvious then as it is now. The ability to strike new free deals with other countries around the world, countries that we have no deal with now. Indeed, our ability to improve on existing deals we enjoy through our EU membership is a bonus.

But here we are, over 1,000 days since that Referendum, that my side lost, arguing about the terms of our withdrawal. We’ve barely started on the important stuff of our future relationships – with the rest of the world and the EU, our biggest single trading partner.

So bad has the situation become, we now find ourselves gearing up for another EU Parliamentary election.

How did we get here? Dogma. And possibly a fair bit of ignorance.

To be fair, a trade deal appears simple in description. With just three main components – market access arrangements, mutual recognition of regulations, and rules of the deal – it sounds straightforward. Yet a free trade deal can comprise up to 30 chapters, 15,000 pages and complex legal arrangements. Our early scoping conversations with the US, to work out the framework for a future deal, has already concluded five sessions of talks, conducted by up to 200 economists, lawyers, trade negotiators and other stunningly bright individuals, on each side.

Our level of discourse does not do justice to the mind-blowingly complex nature of economic arrangements between sophisticated and complex economies such as those of the UK, the US and the EU.

But it is only recently that the debate has started to move on from the convoluted machinations around the short-term Withdrawal Agreement with its hated, but temporary, backstop. Only now are we beginning to look at the future arrangements with the EU.

Yet it is still the case that some are saying that a no-deal future with the EU is the only way to achieve new deals elsewhere. This is an argument that I find baffling. If Brexit delivers future trade deals, surely the future trade deals we seek must include one with the EU? It represents, after all, nearly half our total trade. Economist will tell you countries tend to trade more with their near neighbours. A healthy trade deal with the EU must be our starting point.

Serious conversations between the Opposition and the Government have begun. They centre around Labour’s call for a customs union. But already there are calls that a customs union solution is one that rejects the opportunities for free trade elsewhere.

Again, a customs union is not a simple entity at all. In its simplest form, it can be an agreement on a single product to join an area that charges a single tariff on that product on all imports into the customs union – the common external tariff. Of course, at the other end of the complexity scale, a customs union with a large economy is limited to all goods (including manufactured products, parts and components, raw materials, agricultural products and more) but excludes all services. A country signing up to a customs union, it is feared, forgoes its own ability to negotiate trade deals elsewhere, due to the commonality of the customs union area. Signing up to the EU customs union will, it is alleged, preclude us from conducting our own trade deals, leave us vulnerable to trade remedies set by someone who may not have our best interests at heart, and exclude us from an opinion on future external trade negotiations.

Yet Leo Veradkar has already indicated that if the UK is interested in an EU deal that includes a customs union, part of that deal should explore our place at the negotiating table within that customs union.

But where this debate is getting bogged down (again) is the assumption that a customs union has one simple shape. It does not.

An economy as complex as ours cannot fit into one single box. Like a bicycle, it has bits slicking out all over the place, parts that need to line up exactly, and components that cannot be bent out of shape. Try to force your bike into the wrong shaped box and it stops working.

For parts of our economy, a customs union may be the ideal option. Our automotive sector, for example, needs smooth borders for that part of the supply chain that flows backwards and forwards across the channel. Because of the supply chain complexity between us and the EU 27, a customs union resolves the rigid Country of Origin rules with third country deals such as that with Korea. And with 60% of the 1.6 million cars we produce every year going to the EU, it resolves the tariff problems – both ways. Agreement with the EU may see an automotive customs union as the optimum solution.

Aerospace is a different matter. With no tariffs on aircraft parts, components and completed products, a customs union is irrelevant. Raw materials are potentially subject to tariffs, but we would want to sign up to the EU’s Inward Processing Regime that allows zero tariffs for aviation raw materials. What is far more important is the regulatory regime that allows aircraft with our parts to fly.

Meanwhile, services are completely excluded from a customs union. Our financial services industry has already made provisions to protect its interests in the EU by opening EU headquarters. But for other services, the equivalence regime, that allows access to the single market based on recognition of an equivalent set of rules, can be withdrawn with just a month’s notice. We need a far better deal on services than the one we may have to live with under with a no-deal Brexit. That deal will be completely separate from any customs union.

And just to confuse the issue more, Rolls Royce make the finest engines in the world. But when they sell a set of engines to an airline, the cost of the engines themselves is just a small part of the maintenance and service contract that goes with them. This begs the philosophical question: Is Rolls Royce a vendor of manufactured engines? Or is it selling the service of power by the hour? It’s an important differential.

Part of our economy might also prefer to be outside the EU’s regulations and customs union. Agrichemicals can be exported far easier, I understand, to Anglophone Africa if we align ourselves with their regulations instead of the EUs. We can decide on who presents the best opportunity for our chemicals sector and act accordingly.

The point is this. Taking a dogmatic approach to all this will get us nowhere. We are already stumbling into another set of MEP elections. We run the risk of creating some sort of endless Groundhog Day that starts out with the same old arguments and finishes with the same old deadlock – forever.

Only by a change of heart to a pragmatic approach can we resolve this stalemate. Only by agreeing to break down our economy into manageable parts can we begin to work through this problem. If it is right for some sectors to join a customs union, then why wouldn’t we do it for those sectors alone. If an alternative solution is needed for other sectors, let’s find them. But for goodness sake, we need a dose of common sense and pragmatism.