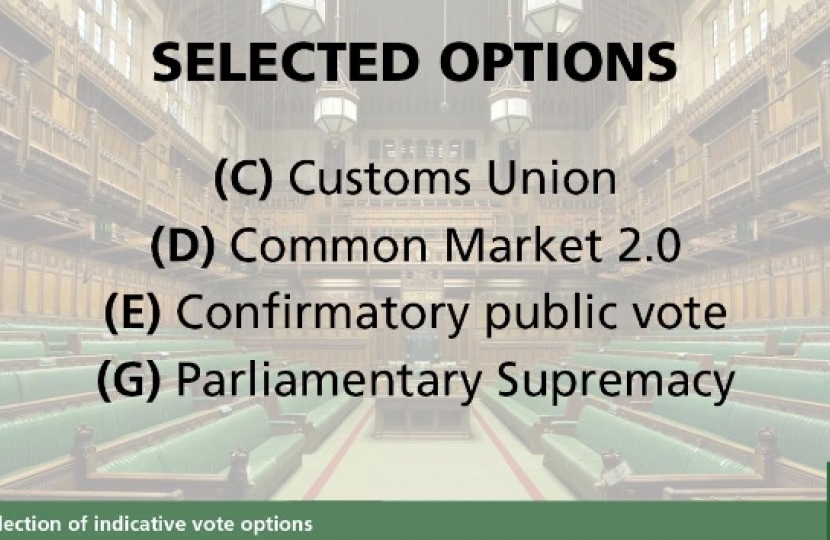 Last night saw the 2nd session of indicative votes - and I set out below the four motions selected by the Speaker and my decisions on how I voted.

This is the second time we have had a chance to vote on this. Last time I voted against the customs union because the amendment contains within it a reference to "a commitment to negotiate a permanent and comprehensive UK-wide customs union". The amendment is scripted with that provision in it and so I am still highly dubious of the long term implication of being within a customs union. However, having had more briefings on the issues of customs unions, I can see that this may be a way forward to tackle the impasse. But, a customs union ties us in a common external tariff and means we may not be able to negotiate full trade deals elsewhere, and it covers goods only, not services and may not completely tackle agricultural products. Reassuringly, however, it does give us freedom on things like fishing policy. Had this not had the "permanent" clause in it, I might have been minded to support this amendment but because of the permanent nature, I felt that, at best, I could only abstain.

Although a customs union is less restrictive than Common Market (for example, membership of the Common Market will likely come with requirement of the four freedoms that includes movement of people, some regulatory oversight and ECJ coverage), this amendment still maintains the clause (now under paragraph D) that this proposal lasts "at least until alternative arrangements that maintain frictionless trade with the EU  ....... have been agreed". Despite that potential sunset clause, I am still reluctant to support what may tie us into the EU too deeply, with too many commitments. However, rejecting it out of hand may prevent us moving forward, which is why I have abstained.

This was the hardest decision of the four. Last week I abstained on this. Today I have supported it, and this needs careful explanation.

There is a great deal of talk of a general election to clear this impasse in parliament. The fixed term parliament system requires MPs to vote in favour of a general election called before the 5 year period is up. Should our Prime Minister call for an election, I would vote against it for several reasons. Aside from the foolishness of calling a general election during a time of profound democratic stress, the idea of a multiple issue election being called to solve a single-issue problem is a complete nonsense. The two main parties may put forward slightly different views on Brexit, but they will also have policies on social care, education, security, nationalising utilities and whole raft of ideas. People may find they can't vote how they want on the EU because the party that delivers what they want may have opposing views to theirs on other issues. We could end up with new actors but the same bad play. Secondly, the idea that we would be holding a general election to choose the next government fully in the knowledge that the Conservative Party will be changing its leader within weeks or days of the outcome is ridiculous. People vote for their leader and we will not be putting forward the leader that will govern for the vast majority of the parliament, as has already been indicated by the Prime Minister. However, as an MP, the act of voting against an election strikes me as undemocratic and I do not feel comfortable with that possibility. To vote against a general election, I feel it important to propose an alternative electoral option. That is why I have supported the option to have a confirmatory vote.

These proposals merely seek confirmation by the public that they – you – are happy with the deal being proposed. It is important to remember that this is not necessarily a second referendum on the previous vote in 2016. If it is the case that the Prime Minister’s deal is put forward to try to clear this impasse, then the option on the ballot paper may be “the PM’s Deal” and “No Deal Brexit”. “Remain” may well not be an option. However, the final option put to any public vote will be determined by the Electoral Commission (as is the case with every referendum).

TO be absolutely clear, this is NOT re-running the last referendum. I agree with those who say that a second referendum is insulting to those who were promised that the 2016 vote was a once in a lifetime opportunity to have a say on our country’s future relationship with the EU. Indeed, if there were no impasse in Parliament, I would not hesitate in rejecting this amendment. But we do not have the luxury of agreement and without the support of the PM’s deal, and the possibility of a foolish call for a general election, I see this as an OK fudge to get things through.

A highly technical amendment that gets deep into the weeds of the Repeal Act (the one that put into place this whole process). This effectively says that if there is no agreement, the government must try to extend A50 and if it can’t it needs to revoke A50, cancelling Brexit altogether. This, essentially, locks in the indication a few weeks ago that Parliament is against a no-deal Brexit. I am against leaving without a deal, but I am enthusiastic to find a solution to this impasse and not give up altogether. That is why I voted no.