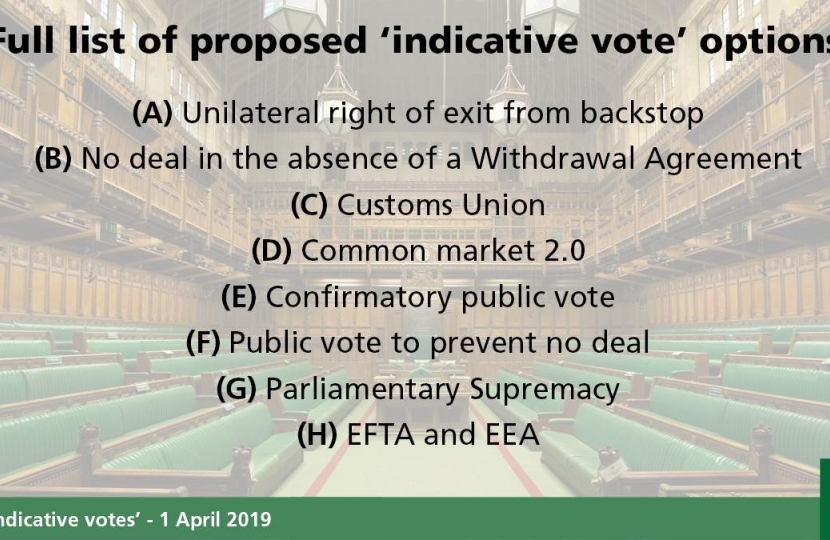 The votes last night, seeking some sort of direction of travel, failed to achieve any clarity. But for the purposes of transparency, it might be helpful for people to see how I voted, and why. However, before going through each motion line by line, it should be remembered that I have unswervingly supported the PM's deal as the best way to achieve Brexit, so my voting needed to be consistent with that objective. And on the subject of voting for the Withdrawal Agreement, it is probably worth noting here that the hardline view of the European Research Group, who want a harder Brexit than I, may end up thwarting Brexit altogether with their hardline stance. That would be undemocratic and not something I could help with.

Amendment B - No deal
I abstained on this as I wholly believe that no deal is bad for our economy and jobs. Remember, we are talking about the period between now and the long term relationship, so it makes no sense to create a greater economic and diplomatic challenge seeking to get a good long term deal with the EU. However, I recognise that our best negotiating stance is to have no deal on the table, hence abstaining.
Outcome: Ayes 160 - Noes 400. Motion lost

Amendment D - Common Market 2.0
I was tempted to support this for technical reasons. Whilst I oppose the principal of being in any customs union, thus closing off our ability to strike further free trade deals with the rest of the world, clause c of this amendment states that the UK shall "enter a comprehensive customs arrangement including a common external tariff at least until alternative arrangements that maintain frictionless trade with the EU and no hard border on the island of Ireland have been agreed with the EU" As this provides for Common Market 2.0 to be what amounts to a transitional arrangement, this seemed to be acceptable as a way forward. However, on reflection, I felt that it could trap us into a customs union and thus deprive the UK of its opportunities in the wider world.
Outcome: Ayes 188 - Noes 283. Motion lost

Amendment H - EFTA and EEA
This is a soft Brexit, but allows for the UK to be outside the customs union. That is why I was happy to support it.
Outcome: Ayes 65 - Noes 377. Motion lost

Amendment J - Customs Union
I voted against this as it locks us into the EU customs union, preventing us from striking free trade deals elsewhere. This prevents us from securing a Brexit dividend from improved trading relationships with, for example, the US so was not acceptable to me.
Outcome: Ayes 264 - Noes 272. Motion lost

Amendment K - Labour's plan.
Again, this locks us into a customs union so unacceptable. I voted against this.
Outcome: Ayes 237 - Noes 307. Motion lost

Amendment L - Revocation of Article 50
In the event of no deal being voted through the Commons, this stops the Brexit process. This is unacceptable and undemocratic so I rejected it.
Outcome: Ayes 184 - Noes 293. Motion lost

Amendment M - Confirmatory public vote.
This provides for a second referendum to confirm with the public acceptance of the withdrawal terms, whatever they may turn out to be. This area is deep in philosophical complexity, and subject to profound debate. It may be the case that the impasses in the House of Commons may require a second referendum, but to do so may undermine the democratic process and confidence in democracy itself. It is also the case that it undermines further our system of representational democracy. I chose to abstain on this as I neither like the idea, nor want to kill it off.
Outcome: Ayes 268 - Noes 295. Motion lost